RSD 2019 title – exclusively available instore only from 8am 13th April – any remaining stock will be available to buy online from 20th April.Price when released: £29.99

No witnesses of a Bingo Hand Job gig could be found.  No recordings existed.  Yet, when it was announced that the enigmatic band and some unusual friends would play London’s 200-capacity club, The Borderline, on March 14 and 15, 1991, tickets were quickly sold out, traded and re-sold at unreasonable prices.Who were these guys only known as The Doc, Raoul, Ophelia and Stinky (with friends Spanish Charlie, Conrad and Violet)? Legendary, colossal and now of mythical proportions, the second night – March 15, 1991 – is finally and officially released for the very first, and only time! Released for the first time, fully authorised.Michael Stipe as “Stinky”, Peter Buck as “Raoul”, Mike Mills as “Ophelia”, Bill Berry as “The Doc”.With friends Spanish Charlie (Peter Holsapple), Conrad (Billy Bragg) and Violet (Robyn Hitchcock). A blistering hits-packed set, from “a band at the terrifying height of its popularity, caught in the spotlight between college rock integrity and Unplugged stardom.”  —Record Collector 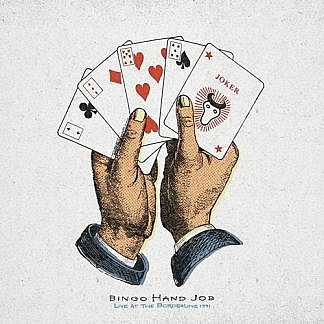