View cart “Mercy Mercy Mercy” has been added to your cart.

Chet Baker (1929 – 1988) was an American jazz trumpeter, actor and vocalist that needs little introduction. Baker earned much attention and critical praise through the 1950s but his well-publicized drug habit also drove his notoriety (he was in and out of jail frequently before enjoying a career resurgence in the late ’70s and ’80s). Chet’s career included collaborations with greats such as Elvis Costello, Charlie Parker and Van Morrison.Mr.Baker was the subject of many books and documentaries throughout the decades and he was even portrayed by Ethan Hawke in the 2015 film Born to Be Blue. Chet began his musical career singing in a church choir and his mother said that he had begun to memorize tunes on the radio before he was even given his first instrument. Peers called Baker a natural musician to whom playing came effortlessly. In the early 1950s, he was chosen by Charlie Parker for a series of West Coast engagements…shortly after this, his song “My Funny Valentine” became a hit and would be associated with Baker for the rest of his career.Mr.Baker (with his quartet) was a regular performer at famous Los Angeles jazz clubs such as The Haig. Chet Baker’s quartet released popular albums between 1953 and 1956 and he won reader’s polls at Metronome & Down Beat magazine, beating trumpeters Miles Davis and Clifford Brown. In 1956, Pacific Jazz Records released Chet Baker Sings, an album that seriously increased his visibility. During most of the 1960s (before heading to Europe more frequently) Chet recorded music that could be classified as ‘West Coast jazz’ From 1978 until his death in 1988, Chet Baker lived and played almost exclusively in Europe, returning to the U.S.once a year for a few performances. This was Baker’s most prolific era as a recording artist. On the album, we are presenting you today (Mr.B.) you’ll find Dutch recordings (recorded in 1983 & released in 1984). This rare gem of an album is comprised out of tracks written by some of the top jazz composers of all time (Herbie Hancock, Horace Silver, David Brubeck,..) and played meticulously by Baker and his all-star line-up trio consisting out of Ricardo Del Fra (Ennio Morricone), John Engels (Toots Thielemans, Dizzy Gillespie) and Michel Graillier (Magma, Steve Grossman).On the bonus tracks, you’ll also find a top performance from Philip Catherine (Placebo) on guitar. Be prepared for eight sublime tunes that bring out the more intimate and touching aspects of the Chet Baker sound, a fantastic session where the master plays his themes with an almost religious surrender. There is a sadness permeating the trumpeter’s sound throughout…a deep and touching beauty can be felt, marking this as one of Chet’s best from the period. Originally released in 1984, Tidal Waves Music now proudly presents the first official reissue of Chet Baker’s classic Mr.B.album.This reissue was remastered by Peter Brussee (Herman Brood) and is featuring the original album cover shot by Hans Harzheim (Pharoah Sanders, Coltrane & Sun Ra). Also included are the original liner notes from jazz writer Wim Van Eyle and two bonus tracks that were not on the original vinyl release. This reissue comes as a deluxe 180g vinyl edition (strictly limited to 500) with obi strip…released exclusively for Record Store Day 2020 and available in participating stores on April 18.

Be the first to review “Mr. B (clear vinyl)” Cancel reply 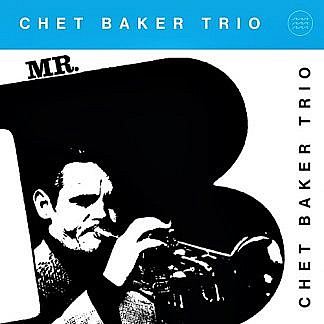