Doug Carn released four records for the Black Jazz label, each album outdoing the previous one in the eyes of many critics. Adam’s Apple was his last (1974) album for the label and the first without Jean Carn, instead relying on John Conner and Joyce Greene to provide the necessary stalwart vocal chops that the recording demanded. The band is a who’s who of blazing talent, featuring reedman Ronnie Laws and fellow Black Jazz recording artist Calvin Keys on guitar, led by Carn’s increasingly electronic excursions on a variety of different keyboards. The result is a record that brings to mind Herbie Hancock’s Headhunters, electric Miles, maybe even Earth, Wind & Fire, but principally instilled within the body of the work is an attachment to Gospel music and its inherent spiritualism, a style of music that Carn spent his formative musical years as a dedicated student of.
The set begins with the latin-tinged and percussive anthem “Chant”, featuring a strong vocal duet and some outerworldy synth work, breaking step with the previous style of music recorded on the Black Jazz label and angling towards a more futuristic and expressive style of playing—a fusion of Space-Age, Afro-Cuban Rhythms and traditional Jazz formulas. Synth-lines double up over the existing bass and brass harmonies, undulating between crisp bells and snapping hand percussion—even a djembe appears towards the end of the track—while an acoustic piano rings sharply throughout the melodic canopy.
Higher Ground begins similarly to “Chant” with a vocal duet bringing proceedings roaring into action, a song that bops along with a soulful step underpinned by seriously funky, syncopated drumming and Carn’s eclectic and cool organ playing that sits so deep in the pocket he’s practically fumbling for spare change…
“Sweet Season” takes things off the pressure cooker for a moment and pivots on a cold Fender Rhodes driven groove, hitting some gorgeous chromatics and pulsing with an extraterresrial energy, the vocals vibing out on an idiosynchratic, purposeful sense of urban spiritualism. The cover of Earth Wind & Fire’s Mighty Mighty is stripped back and swinging, vocally raw and soulful with some superfluous piano playing from Carn, rhythmical and heavy in parts and equally ambidextrous and nimble fingered in others, a genial composition reimagined by some of the unequivocal Jazz greats.
The Title track Adams Apple is about as close as the music gets towards raw Funk, interspersed with swelling and jagged synths a la Bernie Worrell, a track that sounds like a session between McCoy Tyner and George Clinton with some superb reed work from Ronnie Laws on alto-sax; a defiant footbopper that makes it difficult not to move your body to.
When reaching the album’s crescendo, Western Sunrise, a sense of melancholy marks the occasion at a genuine sense of sadness that the album has come to an end. It is a deeply spiritual track, marked by poignant lyrics alluding to new dawns and earthy beginnings, the paths of our fathers and the free flight of birds through the sky, messages that when added on top of the backing track—led by Carn’s inimitable and deeply soulful Hammond B3 playing, Gerald Brown’s superb drumming (for which he has undoubtedly not recieved the requisite praise for) and Big Black’s masterful percussion—lift the listener to a higher plane of sonic spirituality. Carn succinctly gathers the emotions of the listener, extends a metaphorical hand to them and walks them towards a new sunrise; a new dawn has broken.
Overall, Adams Apple is a sonic confluence of musical cultures and a total listening experience sure to shake up your ideas about music and instill you with a renewed and infectious passion for Jazz and its tributaries. The album is high art—without question—and a deeply spiritual affair, awakening the listener and evoking some deep seeded and spiritual imagery throughout the experience, an album that is as cathartic as it is beautiful on the ear.

Be the first to review “Adams Apple” Cancel reply 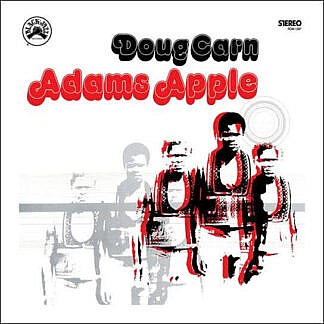