Wes Montgomery
Back On Indiana Avenue

RSD 2019 title – exclusively available instore only from 8am 13th April – any remaining stock will be available to buy online from 20th April.Price when released: £37.99

Back on Indiana Avenue: The Carroll DeCamp Recordings is a collection of previously-unissued recordings from jazz guitar legend Wes Montgomery captured live and in studio in his hometown of Indianapolis, Indiana in the mid-to-late 1950s by renowned arranger/pianist Carroll DeCamp (Stan Kenton, Les Elgart), who played and hung out with Wes around that time. The deluxe, limited-edition 180-gm 2LP set includes an extensive liner notes insert with rare photos, essays by jazz scholar Lewis Porter and producer Zev Feldman, interviews with guitar icons George Benson and John Scofield, plus guitarist and Carroll DeCamp’ s nephew Royce Campbell and saxophonist/educator/publisher Jamey Aebersold. This is the sixth official Resonance release of previously-unissued Wes Montgomery recordings and fills in an important early piece of the jazz great’ s story. Back on Indiana Avenue Again is mastered by the legendary Bernie Grundman at Bernie Grundman Mastering in Hollywood, CA and pressed at Record Technology, Inc. (RTI).

Be the first to review “Back On Indiana Avenue” Cancel reply 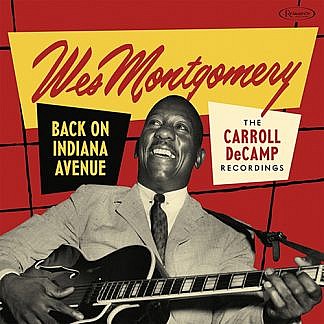 You're viewing: Back On Indiana Avenue £19.99
Add to cart