Roy Ayers
Everybody Loves The Sunshine

Often regarded as one of the greatest vibraphone players ever, Roy Ayers began his career as a jazz player, releasing several albums with Arista Records before his tenure at Polydor Records, during which he built and developed a new R&B style, fusing Jazz with the emerging disco sounds as well as drawing on funk.

The Roy Ayers Ubiquity formed in 1970 and the unit recorded several albums for Polydor featuring such players as Sonny Fortune, Billy Cobham, Omar Hakim, and Alphonse Mouzon. With influences including the electric side of Miles Davis and the Herbie Hancock Sextet the Ubiquity gradually shed its jazz component in favour of R&B/funk and disco.

‘Everybody Loves The Sunshine’ remains one of his best and most popular. The Energetic, uplifting opener ‘Hey-Uh What You Say Come On’ is a call to the floor while the soaring synth strings of ‘The Golden Rod’ blend with Roy’s dynamic Vibes playing. The sumptuous, spacey ‘Keep On Walking’ is a blissed out slab of jazzy soul that would play influence to a lot of the more organic soul sounds of the early 2000s and beyond, the bustling funker ‘You And Me My Love’ is a bolshy helping of handclapping, butt wiggling goodness while the percussive ‘It Ain’t Your Sign It’s Mine’ shows how much Don Blackman would be inspired by this album at the turn of the 80s. The jazzy ‘People And The World’ tears along apace with the incredible voice of Chicas (Debbie Darby) who provides duet and backing vocals throughout. Undoubtedly the star of the album is the much sampled, much played and much loved title track: the epitome of laid back, sun drenched soul-jazz that is as fresh today and when it was created four decades ago. Stunning album that has so much craft, talent and invention.

Be the first to review “Everybody Loves The Sunshine” Cancel reply 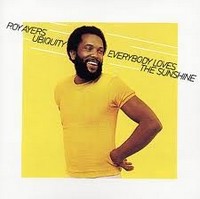 You're viewing: Everybody Loves The Sunshine £9.99
Add to cart