PYJÆN are delighted to announce the release of their second album ‘Feast’, planned for September 2021 on DeepMatter Records. The five-piece outfit reaches inside the deep, multidimensional well of what is broadly called Jazz, bringing together all its diverse components in a singular, emotional sound. After setting a blueprint for their multifaceted artistry, combining cross-genre sensibilities with ferocious talent on their first two releases, PYJÆN has been busy writing and recording music for their second album, their most accomplished offering yet. ‘Feast’ was recorded at Peter Gabriel’s legendary Real World Studios in Bath over a full week in November 2020. This proved to be an unforgettable experience, which elevated the music and created an unrivalled connection between the 5 band members and the albums’ featured artists Nix Northwest, Elisa Imperilee, Hilts and Corto Alto.
With the recording of this new record, each member of the group brought their own specific flavour to the table. They explain: “We want the album to showcase our growing abilities and confidence as a group of 5 individuals, each with strong personalities and varied sets of influences, while still leaving room for featured artists, an exercise we thoroughly enjoyed on our ‘Sage Secrets’ EP with Blue Lab Beats and Odette Peters.” The EP reached over 1M streams on Spotify within only 6 months, testimony that the band has become a major force in the UK “Jazz and beyond” scene. Their new album will fearlessly navigate the world of funk, jazz, hip-hop and punk. With their trademark raw energy, their objective is to bring people together in their love for music.

Adventurous songwriting, meticulous timing, incredibly tight horn arrangements and an obvious joy to play together are the PYJÆN trademarks. These are brought to the table in ‘Feast’ through vibrant melodies and rich cadences. The band presents a full course musical experience with four singles: in ‘Beetle Juice’ the band joins forces with rapper Nix Northwest to offer a delicious tune characterized by an easygoing yet alluring atmosphere. ‘The Nightbus’ sees a vivacious journey narrated by enticing piano, guitar and trumpet motifs. ‘Moonlight’ sets a sultry tone with Elisa Imperilee’s ethereal vocals accompanied by delightful and intricate beat sequences. ‘Stay Home’ ‘Stay Home’ is the final instalment before PYJÆN’s great ‘Feast’ – this time seeing the band bring in Scottish Jazz Band of the Year, corto.alto (Liam Shortall) who lays down his signature trombone over the addictive bass line from the band’s Ben Crane. With its mouth-watering combinations of jazz, ‘Feast’ is a witness to the band’s exponential growth, taking listeners on a vivid sensory experience

Formed in 2016, PYJÆN is composed of Dani Diodato (guitar), Dylan Jones (trumpet), Ben Vize (sax), Benjamin Crane (bass) and Charlie Hutchinson (drums). Releasing their debut self-titled album to wide critical and public acclaim, they have gathered support from the likes of Gilles Peterson, Huey Morgan, Jazz FM, and Clash Magazine to name a few. Live, as seen at A Love Supreme, Ronnie Scott’s, Jazz Cafe or Brainchild Festival, the atmosphere is sizzling and the sense of enjoyment communicated from the stage is infectious.

Be the first to review “Feast” Cancel reply 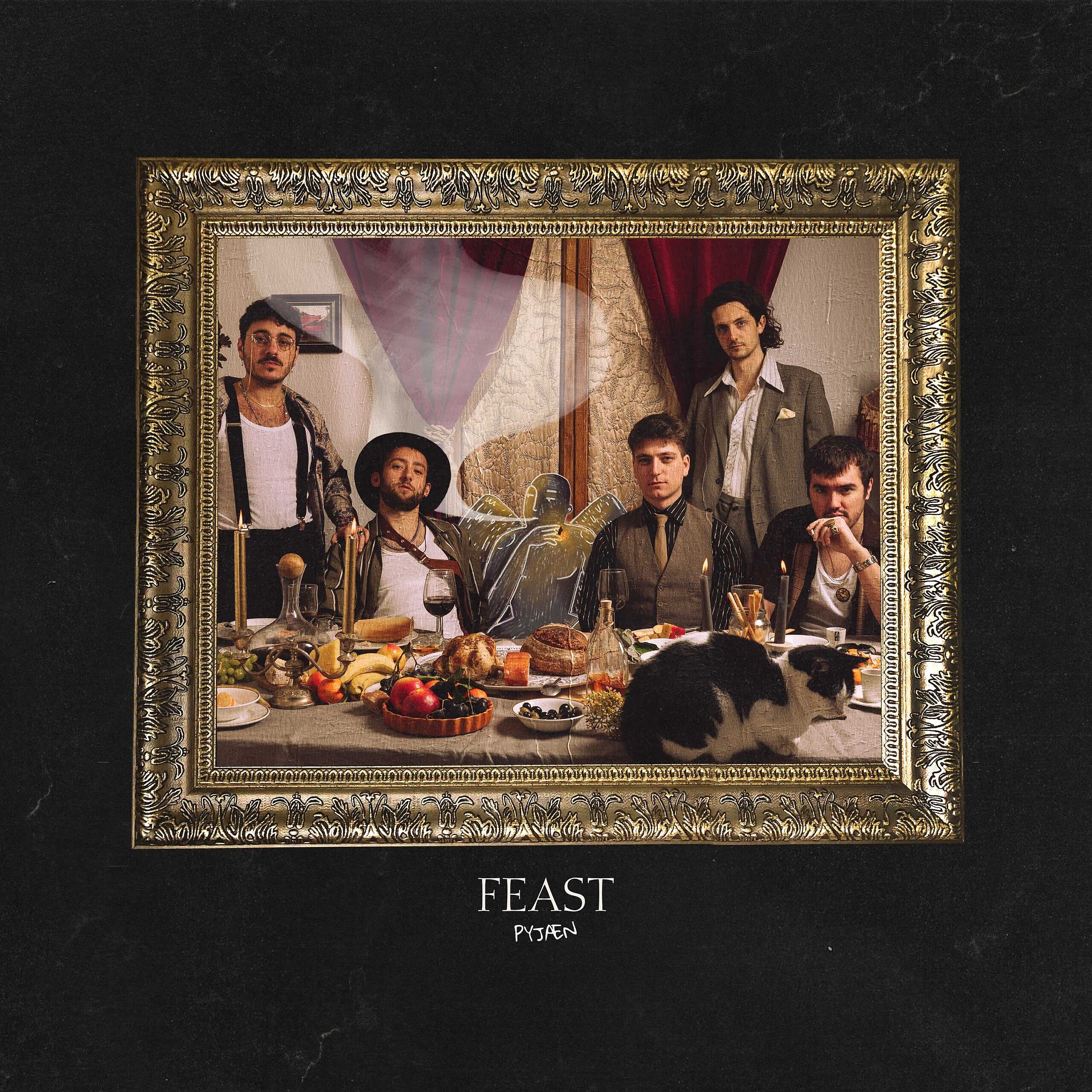