RSD 2019 title – exclusively available instore only from 8am 13th April – any remaining stock will be available to buy online from 20th April.Price when released: £33.99

Exclusive to Record Store Day 2019, Demon Music presents a narrated full-cast TV soundtrack adventure starring William Hartnell as the Doctor, pitted against a race of deadly female clones and their mechanical slaves. In this classic 4 part ‘lost’ adventure, first shown on BBC TV in September/October 1965, the TARDIS materialises on a doomed planet. The Doctor (William Hartnell), Steven (Peter Purves) and Vicki (Maureen O’Brien) discover two crashed spaceships, their inhabitants locked in battle with each other. In one corner stand the Drahvins, a race of female cloned warriors; in the other the Rills, hideous inhuman space travellers. The Doctor and his friends become pawns in a deadly game of strategy and deception. Will anyone escape with their lives? Presented across 2 x Heavyweight 180g pieces of Orange with Purple Splatter vinyl, this narrated TV soundtrack evokes a classic Doctor Who adventure in all its aural magnificence. From the eerie sonics of Ron Grainer & Delia Derbyshire’s theme tune, and the familiar ‘wheezing, groaning’ of the TARDIS, through to the menacing chirrup of the squat, metallic Chumbley robots and the atmospherics of the Rills’ spaceship, the story is alive with weird and wonderful sound. Written by William Emms, the story presents a traditional morality tale with a twist. Linking narration is provided by Peter Purves (Steven) and the cast includes Stephanie Bidmead as Maaga. The final episode leads into the prelude to the epic adventure The Daleks’ Master Plan (just released on Demon Records). The film recordings of all but one episode of this story are lost from the BBC archives. Dum-de-dum, dum-de-dum, dum-de-dum, dummedy-dum…

Be the first to review “Galaxy 4” Cancel reply 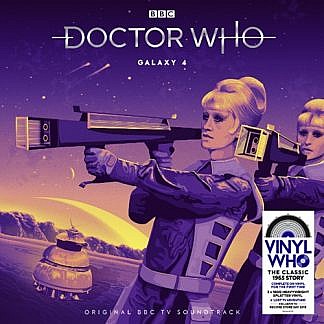