The seven-piece afro-rock band Demon Fuzz released their debut album Afreaka! In 1970.
The album is a surefire winner and now music on Vinyl follow with this slab of freaky mayhem!
One of the songs on the album is the cover of the Screamin’ Jay Hawkins classic I Put a Spell on You. The track became the only 7” that Demon Fuzz ever released, the original issue on the Dawn label is hugely collectable. The 7” edition let us feel the raw power of the mash of Afro-Latin funk, psychedelia and breakbeats. Two other songs can be found on the vinyl, the deep and groovy Message to Mankind and the rhythmic shifts of the lengthy instrumental Fuzz Oriental Blues. 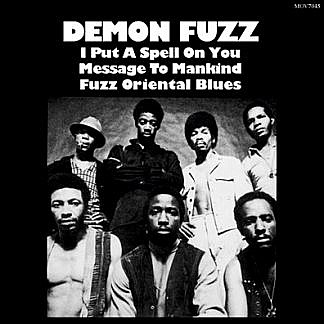