Fania All-Stars
Live at The Cheetah

Craft recordings have spared no expense in putting their latest release together, driving further into Latin territories in the same spirit as one of their most recent reissues, Joe Bataan’s Latin soul classic Gypsy Woman on Fania records. Their latest package, Fania All-Stars “Live” At The Cheetah (Vol. 1), sees an all-analogue mastering from the original tapes by Kevin Gray at Cohearent Audio. It is also a 50th anniversary release, celebrating the career defining live concert album and one of the most popular salsa releases on the Fania label, pressed up on heavyweight 180g vinyl with a gatefold, tip-on sleeve. Featuring an arsenal of some of the top Latin musicians of the day (Ray Barretto – congas, Willie Colon – trombone, Larry Harlow – keys, Johnny Pacheco – flute, Roberto Roena – bongos, Bobby Valentin – bass, Hector Lavoe, Ismael Miranda and Adalberto Santiago – Vocals) the original concert was filmed live on Thursday 26th August 1971 at the Cheetah Nightclub on Broadway at 53rd in New York City.

The live recording went on to be a full feature film called This Latin Thing of Ours (Nuestra Cosa Latina), a fantastic exposé of Latin culture in New York in the early seventies that depicts the culture and the music of the Fania All-Stars, living conditions and daily life for Puerto Rican and Domican communities in Spanish Harlem and the South Bronx and the prevailing cultural climate for Latin communities in New York. It also captures the danceability and native swing of New York Salsa, and the rhythmic sensibilities of the community where this music came from: people used what they could to fashion instruments, hitting improvised percussion from metal drainpipes to coffee cans and just about anything in-between that they could create a tone from, jamming along with each other on their stoops with polyrhythmic zeal. New York salsa is a rich style of music, seasoned with the and musicality and rhythms of the Caribbean and the sonic maturity and orchestration of US jazz, but with a certain urban toughness to it, reflective of the harsh and volatile conditions of El Barrio where most of the musicians were brought up.

Highlights include Descarga Fania, featuring walloping timbales solos and deep, guttural percussion and rhythmically complex lines that synchronise very satisfyingly. It sounds almost as if the players are dancing along to the music, their expressions nothing short of joyful. Another key track is Anacaona, a tune written by Bobby Valentin but sung and helmed by Puerto Rican singer Cheo Feliciano, a romantic and deeply passionate number laden with the metallic thwack of cowbells, the syncopated rattle of maracas, the rootsy clack of clave and fantastic coros (or unison chants) from the assembled vocalists. Rico!

Be the first to review “Live at The Cheetah” Cancel reply 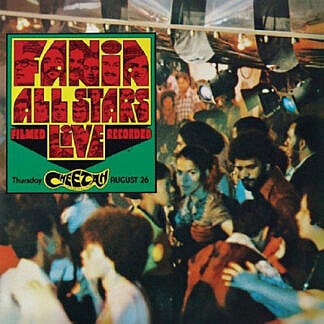