RSD 2019 title – exclusively available instore only from 8am 13th April – any remaining stock will be available to buy online from 20th April.Price when released: £34.99

Double LP of Ramones – Live At The Palladium, New York, NY (12/31/79) which first appeared on CD only as part of the 40th Anniversary Deluxe set of “Road To Ruin”. This then previously unreleased recording of the band’s entire 1979 New Year’s Eve concert, was mixed live by Stasium, and broadcast on WNEW-FM. Recorded in New York City at The Palladium, with audio sourced from Tommy Ramone’s original cassette of the console recording, it features blistering performances of “Blitzkrieg Bop,” “Rockaway Beach,” and “Sheena Is A Punk Rocker,” along with several songs from Road To Ruin: “I Don’t Want You,” “I Wanna Be Sedated,” and “I Wanted Everything”. This will be its first release on vinyl. 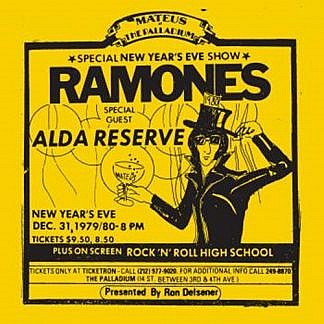