UK Jazz outfit Vertaal’s debut mixtape / album on vinyl, Paradigm Shifting, is a stunning body of music, reflecting the rich evolution of the UK Jazz scene and its myriad of influences and musical styles. Flitting between Broken Beat and Hip-Hop productions to straight up Jazz-Dance, it idea record unlike any other recent UK Jazz album—a unique and idiosyncratic recording, the groups first vinyl release. The album was funded in majority through a kickstarter campaign—the ensemble of donors thanked on one of the inner sleeves—and recorded and mastered remotely.

Polar is a rolling Jazz dancer, underlaid by silky Rhodes and a smooth, syncopated bass line, taught and funky, with intermittent bursts of wah-wah guitar. Kora hinges off electric key stabs and a rapid Broken-Beat like drum pattern, a piece of music that symbolises the relationship between New British Jazz and electronic, producer made music, traversing House and Hip-Hop influences. HS2 is a brooding and more melancholic track, a lengthy number and the most spiritual leaning song of the album. Khali is an uptempo dancer with some excellent percussion and horn work—a deep cut.

The evolution of the new wave of British Jazz has been an exiting affair and no doubt about it Vertaal are some of the finest exponents of that sound. Only 300 copies of this album were pressed—in translucent sky blue and individually numbered—making it a fairly limited release. Be sure to get your hands on one before they run out! 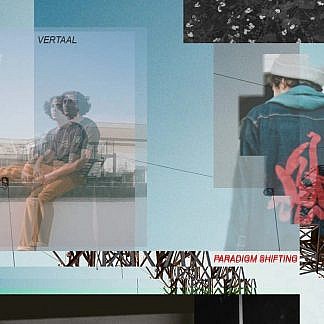