Jean Paul Maunick and Gilles Peterson’s latest project Str4ta is a resurrection of British Jazz funk from the late 1970’s and 80’s, attempting to capture the essence of the golden years of Brit-funk which was soundtracked by bands like Freeez, Light of the World, Atmosfear, Beggar and Co and Hi-Tension. Of course, Bluey’s stewardship of this group is noteworthy, having played with most of these groups at the time (apart from Atmosfear and B&C) while also forming Incognito and the Warriors, the former’s 1981 album “Jazz-Funk” becoming one of the most seminal albums of this niche and relatively underground British genre. Perhaps those that grew up with Brit-funk, certainly soul boys and the jazz-funk crowd alike, would have often derided it as lacking in quality compared to US releases of the day—although comparing the likes of the Olympic Runners or Cayenne to say Pleasure or Roy Ayers Ubiquity would be a totally futile exercise, musical apples and oranges. However, the aesthetic merits of Brit-funk cannot be denied, choppy rhythm sections, oftentimes heavier and unbalanced basslines—that came about as a result of recording with engineers who were used to taping reggae sessions—and jangly DIY musicality from musicians who often had more passion and love for the music than actual playing power—characterise this unique British sound that drew on the dynamic cultural and musical influences of the day. Inner London, the jazz-funk scene, Crackers, the Soul Mafia, black Britain, the optimism of imported American music and the rarity and richness in sound of American fusion and jazz-funk culminated in the melting pot that was British jazz-funk or Brit-funk. It captured a unique moment in time when most black music was commercially unavailable, restricted from the mainstream airways—save for a few shows from the likes of Greg Edwards and Robbie Vincent—broadcast from homemade ariels on top of high-rise flats (Invicta, LWR, Kiss), played in inner London clubs or on the home counties soul circuit by DJs such as Chris Hill, Tom Holland and Pete Tong.

From this background context and newly risen from the ashes of a once near moribund scene enter Str4ta, who have made a habit of recontextualising British jazz-funk with a personnel of contemporary musicians (Emma Jean Thackray, Theo Croker, Omar and Valerie Etienne to name a few), with some of the original members of the scene such as Bluey and Peter Hinds on keyboards (Atmosfear, Light of the World, Incognito), bridging the gap between the halcyon days of the scene with newer players, joining the musical and generational dots. Standouts include the Emma Jean Thackray composed Lazy Days, arguably the strongest track on the album which takes inspiration from the upbeat funk of Freeez’s Beggars Banquet classic Southern Freeez, with Thackray’s effervescent vocal floating over the top of cool keys and popping basslines: Brit-funk with the vocal stylings and signatures of broken beat. Night Flight is another standout, a track that sounds like a carbon copy of Sun Palace’s Rude Movements, a rare slab of British electro-funk that piqued interest so much in recent years that it even saw a rework from Black Mahogani head honcho Moodymann. The track is scored with signature squelching basslines and Roland 808 drum machines, hallmarks of this brand of home brewed electro-funk. Turn Me Around is another up-tempo jazz-funk mover, with drums reminiscent of Atmosfear’s Dancing Into Outer Space. The tributes to this band, helmed by Lester Bachelor on bass and Andy Sojka on guitar (also the founder of the Elite record label), are apparent from the outset; the name of the album is inspired by the name of the group as the borrowed suffix “fear” shows. Why Must You Fly features some eery synthesiser from London legend Omar Lyefook, while Find Your Heaven verges on themes of boogie, certainly centring itself in the music of Evelyn Champagne King, Change and Toney Lee. When You Call Me sounds like a rendering of Maze’s 1985 classic Twilight, scored with similar electronic instrumentation and with a warm, rounded low end that bumps the groove along. A tight and funky body of work that pays homage to the music of Bluey and Gilles Peterson’s youths while keeping the Brit-funk torch well and truly lit some 40 years later. Bless the funk!

Be the first to review “Str4tasfear” Cancel reply 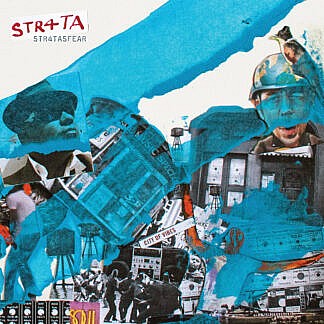