Ezra Collective
Where Im Meant To Be

Ezra Collective’s second album is a bold and pungent amalgam of worldly musical styles and flavours, concentrated through the hot-footed improvisational prowess of an ensemble of some of the finest players on the contemporary London jazz scene. Joe Armon Jones (keys), brothers Femi Koleoso (drums) and TJ Koleoso (bass), James Mollison (tenor) and Ifu Ogunjobi (trumpet) make up the group’s core, although on this release there are plenty of impressive cameos from the likes of Sampa the Great, Kojey Radical, Emili Sandé and Nao. Expect new London sounds with serious danceability, heavyweight musical chops and a tight knit group cohesion that elevates the musical output of this album beyond their previous two releases. Compositionally, you can hear the inveterate skills of Armon Jones who seems to keep getting better and better at what he does, while the rhythm section appears tighter than on previous releases. After three sold-out shows at Ronnie Scotts to release the album, Ezra Collective seem firmly poised to penetrate the mainstream consciousness with their raucous and dynamic brand of music, bringing together a diversity of rhythmical and stylistic tropes from jazz, reggae, West African afrobeat, dancehall, funk and soul. They seem to be lifting jazz beyond its often-deemed fusty reputation and rebranding it through a London-centric, urban lens.

Set highlights include Victory Dance, a propulsive and upbeat outing that takes on a South American flare with cumbia style percussion outflanking the drums, alongside hard breathing horns and percussive upright from Armon Jones. Togetherness begins with a vocal hook indirectly lifted from Damian Marley’s Welcome To Jamrock—“out in the street, they call it Ezra!” goes the refrain—after which it descends into a dancehall groove, drawing heavily on Afro-Caribbean musical influences. In a similar vein, Ego Killah is a straight ahead dub reggae groove, a tune with enough bass weight and swagger to sit comfortably on its own as a ready-made sound system dubplate, a tune that could undoubtedly mash up the dance. Smile is another key track in which Armon Jones’ keys come to the fore, bringing broader orchestral elements and his compositional prowess together akin to the likes of BadBadNotGood, whose recent forays with arranger Arthur Verocai contain similar string-laden arrangements. The track then segues into Live Strong, which carries on along similar lines, featuring stunning horn duets, funky rhythmical patterns and Midas touch electric keys that scatter and abstract the changes mesmerically. Siesta features a great vocal cameo from Emeli Sandé which imbibes a sense of accessibility to an admittedly underground style of music that, with releases such as this, can undoubtedly find new life above ground and grow. Perhaps groups like Ezra Collective and Kokoroko are building new bridges between the London jazz scene and the mainstream that hitherto have not been connected.

Overall, a vibrant and up-tempo release with gathered and well directed musicality which draws upon contemporary and worldly influences to create a sound unique to Ezra Collective, slightly more polished than their previous releases and perhaps a sign of bigger things to come from the South London based ensemble. 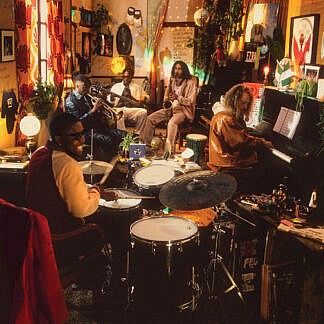