Former Spiritland music programmer and in-demand DJ Miche (Michael Davies) is deejaying more than anything else these days, while fulfilling his licensing commitments with a handful of independent record labels. His sets and musical output errs towards Soul and Modern Soul, while also unearthing Brazilian, Jazz-Funk, Gospel and AOR album grooves, even flirting with Jazz-Fusion at his most recent event, Tudo Joia, at the Social in Marylebone—hosted alongside veteran musos Gary Johnson, Mark G V Taylor and Patrick Forge. His most recent compilation, With Love Volume 001, explores Davies’ musical tastes, delving into recent discoveries and trusted tracks that have served him well in recent DJ sets and at his periodical Miche & Friends party. With Love presents rare and unobtainable records to new audiences, which—without Miche’s enthusiastic promotion and tenacious licensing—would arguably not have seen the light of day. “It’s really a compilation of soul music from across the world that is almost impossible to find. The project was about sharing lost gems rather than hunting down ridiculously expensive rarities, and luckily we ended up doing stuff that I really wanted to find, which tended to be even harder to track down the original license holders for”. The comp makes less of a case here for democratising the value of rare records as the majority aren’t unusually expensive, bar a couple, rather much harder to find in the flesh. “I wanted to put together a comp with 15 awesome tracks rather than tracks that are just worth loads of money and have that pricey rarity/shock factor. Just because a record is expensive and in-demand, it doesn’t always line up with whether or not it is a good record. Most of the time, admittedly, it does—but that’s not necessarily a guarantee”.

The compilation is a multifaceted offering, a multi-genre, kaleidoscopic package, offering an intimate and unfettered glimpse into Davies’ musical mind. It has been compiled for dancing and home use at the same time, the majority of tracks tried and tested units that have been performing well for Miche on the cooler-floor DJ circuit. “Compilations that I’ve bought have generally been split one way or the other, but this comp contains a mixture of tracks that you can play at an afterparty, soul music to be enjoyed at home, it has all sorts of listening purposes. Soul Music at home is beautiful to wake up to in the morning, also goes down great in a nightclub—works really well, you know. I’ve played these tunes out and they’ve always gone great so that’s probably an important part of my selection too.” The predominant blend of tracks heads in the direction of modern soul, although interjections of Brazilian tropicalia and Jazz Fusion don’t come across as incongruous here, clearly all near and dear selections. “I chose the tracks out of love – it’s a fairly self indulgent process. For me it boiled down to the fact that they are all certified to work in the dance. Because I licensed everything myself they had to be people who I actually could get in touch with too. Some might have been more obscure and proved impossible to license so not all of them got to the final draft—as is seldom the case. They all had to be relatively attainable and as good as the records around them. They had to be realistically achievable selections.”

Album highlights include the wah-wah laden deep-funk and rare b side from South Funk Boulevard’s Skying High, with throaty spoken work, deep Bootsyesque vocals and 4/4 groove underpinned with mosquito-tweeter bass lines. The deeply melodic and subtly percussive tropicalia of Papaya’s Favela provides an apt South American segue towards the ethereal Fusion of Grupo Quintaessência’s Serrano, a rare Brazilian Jazz number that sounds as if its been dusted off from the Som da Gente Vaults, soulful in its radiant vocal harmonies, funky in its popping and spluttering rhythm section and deeply jazzy in it’s chord progressions, guitar lines and chromatic electric piano stabs. The album’s opus is in the form of a rare Jazz-Funk Fusion joint taken from the b side of Kentucky radio station WRLS’s “Homemade Album” compilation, a radio station that serviced the Louisville area. Now You’ve Gone Away by City Lites, presumably their only recording, is a hard hitting Jazz-Funk groove that kicks off with impudent clav and a chromatically displaced, funked up guitar response. As the tune develops, both the clav and guitar lines mirror each other as electric keys and bass slowly develop in the background along with tense synths. Just after the halfway mark, the song turns itself inside out with a splitting synth solo that torrents through the soundscape like a whirling dervish. Upon personally hearing Davies play this track for the first time at a shared DJ set at Spiritland, I grabbed an original copy from a dealer friend for around 90 quid: a total one tracker. Be a bit smarter than me and grab a copy of With Love, showcasing this unreal piece of music with more than listenable material either side of it… 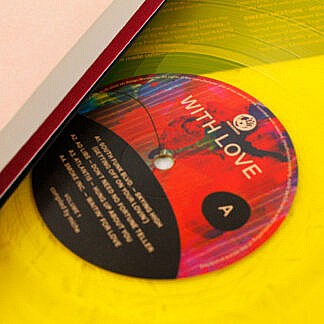 You're viewing: With Love Volume One compiled by Miche (Coloured vinyl) £27.99
Add to basket