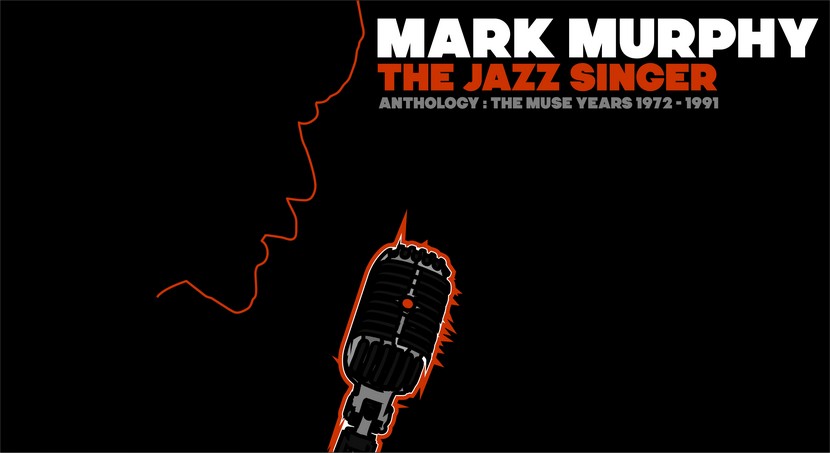 Mark Murphy is the archetypal Jazz singer; the term vocaleese was almost invented for him. His clear diction, pure tone and jazzy delivery earmarked Murphy as a singer of rare talent and one of post Hard Bop’s true singing legends.  He combined style, incredible technique and a sense of humour. He displayed a level of improvisation and spontaneity that many contemporary Jazz Musicians would be proud to achieve. Mark was able to find and express the inner meaning of a song, spin it around and deliver it in a new and fresh way. He was always achingly hip, his incredible sense of rhythm was evident in his recordings and live appearances. Mark Murphy is surely worthy of the title of this Anthology ‘The Jazz Singer’.

Murphy was born on14th March 1932 in Syracuse New York. Raised in Fulton New York, his parents sang in the local Methodist church choir and both his aunt and grandmother were church organists there.  He was playing piano by the age of seven and began playing and singing with his brother’s Jazz band as a youngster. .In 1953, he graduated from Syracuse University having studied music and theatre.

That year Sammy Davis Jr heard him at a jam session and invited him on stage to perform with him.  Several TV performances followed that helped him come to the attention of Decca Records, where he recorded the album ‘Meet Mark Murphy’.  After two sets for the label he moved to the West coast and Capitol Records where he released three albums.  These early sets were tasteful, but quite conservative.  Mark was being heralded as the new Sinatra, and could have made a comfortable living as a crooner, but he chose to make music with more of an edge and improvise. He returned to the East Coast with Riverside Records.  His debut for the Jazz label ‘Rah’ is still held in high esteem and includes swinging versions of ‘My Favourite Things’, ‘Milestones’ and Horace Silver’s ‘Doodlin’.  His penchant for classy performances that combined the poise of a Tony Bennett with vocal improvisation and scat over compulsive Jazz grooves was to characterize his career, and thirty years later introduce him to a whole new audience.  He recorded one further set for Riverside ‘That’s How I Love The Blues’ a personal favourite of the singer.

In the early sixties musical tastes were changing and the Rock N Roll and Beat explosion closed doors for Jazz musicians and singers in particular.  Murphy moved to London where he pursued an acting career appearing in the comedy film ‘Just like a Woman’, whilst still singing in Jazz clubs. He stayed in London for nine years where he recorded two albums.  He also released the classic ‘Midnight Mood’ for the Saba label in Germany with the Kenny Clarke and Francy Boland band.

Murphy returned to America in 1972 and soon after signed for Muse Records.  He remained with Joe Field’s label until 1994 and recorded his best body of work there, recording sixteen albums, in twenty one years.  His versatility was a feature; he included everything from Brazilian Jazz, to Blues, to Bop, to Ballads to tribute sets and Jazz Dance.  He wrote lyrics to Jazz classics such as Freddie Hubbard’s ‘Red Clay’, Herbie Hancock’s ‘Cantaloupe Island’, Oliver Nelson’s ‘Stolen Moments’, and McCoy Tyner’s ‘Effendi’ adding a new dimension to each of them. He also recorded beautiful definitive vocal versions of John Coltrane’s ‘Naima’ and Hancock’s ‘Maiden Voyage’. It is perhaps on another Hancock composition ‘Sly’ (from the Head Hunters album) that Murphy shows his true genius adapting a track with a complicated rhythm that would seem unsuitable for vocalisation.

Mark loved Brazilian music , he recorded the ‘Brazil Song’ set with the group Via Brazil in 1983, from which we include two tracks, the brilliant ‘Two Kites’ and the more sombre but beautiful  ‘Bolero De Sato’ which he sings in Portuguese.  It was during the Muse era that he recorded his most critically acclaimed set, ‘Bop For Kerouac’ featuring the track ‘Boplicity’ that put beat-poet Jack Kerouac’s writings to music.

His music was re-discovered by the London Jazz Dance scene of the late 80’s and early 90’s where cuts like ‘Stolen Moments’, ‘On the Red Clay’, ‘Waters Of March’ , ‘Empty Faces’ and many more received the recognition the singer richly deserved. He even recorded a song the frantically paced   ‘Ding Walls’ about the legendary Sunday afternoon sessions there and on the London Jazz scene.  Always a singer’s singer – Ella Fitzgerald once dubbed him ‘my equal’ …….  He started to receive accolades from the Jazz world too.  Murphy won the Downbeat readers’ poll best male Jazz vocalist four times between 1996 and 2001.  He was also Grammy nominated six times.

On this Anthology we have selected his most revered recordings from the Muse years, 17 classic tracks reflecting the different styles that Mark Murphy recorded for the label. As well as the Jazz classics and Brazilian songs mentioned earlier, there other great songs of note included. His version of Stevie Wonder’s ‘Looking For Another Pure Love’ and the lilting ‘I Don’t want To Cry Anymore’ reflect a more soulful approach. ‘Come And Get Me’, the earliest recording here dating from November ’72 is moody Psychedelic Blues. He had previously released this song as a non album single for Riverside in 1962.

It takes a very special singer to take a well known Beatles song and re-interpret it with a Big Band arrangement, and make it his own. This Anthology closes with what has to be one of finest Jazz Vocal versions from their entire songbook, his take on ‘Eleanor Rigby’. Mark Murphy was a very special singer. He has inspired, influenced and passed the baton on to a new generation of singers including Kurt Elling to keep Jazz singing alive.

His recording career continued into his seventies.   He recorded fourteen albums between 1996 and 2013 for various labels including a reuniting with Fields for his High Note label.  He also recorded with the Five Corners Quintet whilst Nicola Conte reworked ‘Stolen Moments’ for his brilliant ‘The Modern Sound Of’ album. Mark Murphy was also a Jazz vocal tutor and he taught in Austria with lifelong friend singer Shelia Jordan.  Mark leaves a wonderful and diverse body of work.  Sadly he passed away from Pneumonia on 22nd October 2015, whilst we were working on this Anthology. His stature as one of great Jazz singers was confirmed by Obituaries in major broadsheets like The Guardian, New York Times and Washington Post as well as specialist Jazz publications and websites, and he was the feature of a special tribute show from DJ Gilles Peterson.

We are delighted to include Mark Murphy in our Anthology series featuring great but under appreciated artists which has included amongst others ; Gil Scott Heron, Leon Thomas, Marlena Shaw, Esther Phillips, Freddie Hubbard and Eddie Henderson. We hope this album will introduce Mark’s incredible music to the wider audience that it deserves.

Buy CD and Vinyl below