Sharon Jones sadly passed away around a year ago , but thankfully she recorded one last album ‘Soul of a woman’ which is now released on CD , Lp and limited edition red vinyl. Detroit’s legend Amp Fiddler returns with a strong album ‘Amp Dogs night’ now in on CD and LP. Peckam’s finest Ruby Rushton have impressed us this year with two strong albums and they make it three with Trudi’s songbook Vol 2, another fine set.
There are some great Jazz reissue LP’s this week. Cream of the crop is Billy Parker’s Forth World – ‘Freedom of Speech’ featuring Donald Smith and Dee Dee Bridgewater on vocals. It is magnificent Spiritual jazz album originally released on the Strata East label , and the Analogue reissue on Pure Pleasure has an incredible warmth of sound, close to if not better than the rare original. Also from the Strata East label is the rarity John Gordon ‘ Erotica Suite’ . We are also back in stock of the Pharoah Sanders ‘Izipho Zam’ reissue LP for the moment. Joe Henderson’s magnificent ‘The Elements’ ft Alice Coltrane also has a very high quality analogue reissue and the rare Lyman Woodward organisation ‘Saturday Night Special’ originally on the Detroit Strata label now presented as a double LP with extra tracks on BBE.  All of these titles are limited editions, so please order early to secure your copies.
There is a good double CD Anthology of the classy Phyllis Hyman.

I hope that you can join us tomorrow to meet Johnny Britt who will be in store from lunchtime signing copies of his Marvin meets Miles and Christmas albums plus Impromp2 ‘It is what it is’. If you can’t make it but would like a signed copy of any of these you can pre-order them here. We will also have a limited quantity of unsigned copies, so please order now to secure your copy.

Pre-order for next week for Syleena Johnson ‘Rebirth of Soul’ which is shaping up to be one of the best new soul albums of the year. You can hear clips on the site.
Also pre-order for the two Eddie Russ reissue LP’s on Soul Brother arriving next week. Also there are three Pharoah Sanders Impulse albums next week and a further two Strata East titles to come in December. Plus the O.T.Sykes and Van Jones albums are coming out on CD.

20 years of the Soul Brother Label

It is 20 years this month that we released the first record on our Soul Brother Records label. Over that time we have released some great Soul, Funk and Jazz music in over 120 albums.  You can see the titles currently available on Cd and Vinyl here.

Check out this list of 45’s that we uncovered when we were converting part of out office into shop space.All of these are one -off’s so please order early to avoid disappointment.
Also the list of recently LP arrivals. Find all collector’s vinyl here 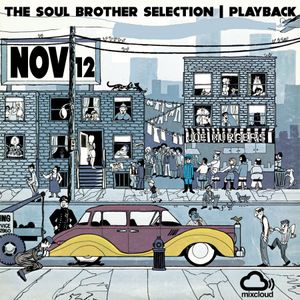 I hope that you enjoyed the show last Sunday, if you missed it you can catch it again here on the podcast. I hope you can join me again this Sunday on Solar radio /sky0129 at 10am for another Soul Brother Selection
Have a great weekend
Laurence