Matthew Halsall’s two 2008/2009 albums have been released for the first time on vinyl in remastered and remixed form with bonus cuts and document his earliest recordings with flautist Chip Wickham, saxophonist Nat Birchall, harpist Rachael Gladwin, bassist Gavin Barras and drummer Gaz Hughes. These two albums are an essential addition to fans of Halsall’s work and of spiritual jazz too. Snarky Puppy keyboardist Bill Laurence’s stunning live performance in Cologne is released on vinyl and CD while Incognito mark almost 40 years in the business with a typically joyous, well produced set full of polished, catchy tunes.
Michael Kiwanuka’s self titled set has been quoted as ‘the best album of the decade’ – it’s certainly a bold, powerful piece of work: check out the clips. Terri Lynne Carrington teams up with Social Science to deliver an emotionally charged set often politcially charged numbers, there’s a great collection of underground disco and boogie from Peter Brown’s P&P related stable of imprints and two hard to find albums see a release in the form of the Optimistic’s self titled, solitary album from 1970 and Caesar Frazier’s 1975 album, imaginitvely titled ’75. Kyle Eastwood and Katherine Penfold also have new releases to check too.
On 7″ our own Voices of East Harlem limited DJ copy 45s are finally in – not many of those around so be quick.

Pre-orders for the next few weeks include our own Leon Thomas 7″ single, the wonderful modern soul favourite ‘Love Each Other’ backed with ‘L.O.V.E’, smooth jazz saxophonist Najee’s 16th studio album as well as a stunning new modal set from Greece via Jazzman Records courtesy of Sokratis Votskos Quartet. See all pre-order titles here

We have an extensive selection of Outta Sight 45s in stock including all the latest releases – check these here to see what you may have missed. We have limited DJ copies on some of these. If you’re looking for older Outta Sight titles have a look through the list at this link.

Record Store Day Black Friday is on 29th November.
You can get more details including a list of releases at this link. We delighted to announce that we have a special release coming out for the event too. Watch this space.

ALBUMS AND SINGLES OF THE MONTH

Check the massive albums and singles of the month feature here

Don’t miss out on the great bargains in the Soul Brother Cd sale here with many great albums and comps available at £6.99 each or 5 for £25 whilst stocks last. 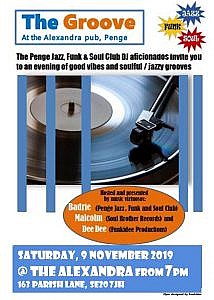 Malcolm has one of his do’s again this weekend – see the flyer for details.

I hope that you enjoyed the show, if you missed it you can catch it again on the podcast here. I hope that you join me again this Sunday at 10am for another Soul brother Selection on Solar radio.com , DAB+ or internet radio

have a great weekend