Tom Misch makes his mark with a nice album that will appeal to those who liked Jordan Rakei’s albums. Sons of Kemet featuring Shabaka Hutchins have their own sound and their new album will appeal to their fans and may also gain them quite a few more.
Lisa Stansfield returns with a strong album on more commercial British Soul, and Bettye Lavette has made a cover album of  Bob Dylan songs.
L.T.D. have four of their classic albums issued on a great value double CD, and Hugh Masekela has a triple CD featuring his classic recordings on Chisa from 66 -76 compiled by himself and producer Stewart Levine, a fitting tribute to the great South African trumpeter who sadly passed away earlier this year.
There are some fine CD compilations this week, the 4th volume of the Stax singles box set, 101 Northern soul a great value 3cd set with 101 tracks, and Ace have two another volume of Motown Girls – Baby i’ve got it  and Southern Groove featuring funk and soul cuts from Atlanta.
On vinyl there is The JB’s ‘Hustle With Speed’ , a couple of great Fela Kuti titles plus loads of 45 from Ace including the great Obrey Wilson track that surfaced a couple of years ago, plus the Chess Northern soul 45 Box set vol 3.

Record Store Day is only two weeks away on Sat 21st April. I hope that you can join us at Soul Brother for our 10th RSD here and for what is shaping up to be our biggest day ever.
There are some great releases this year in every music category.  You can check the UK official list here. We have selected the best titles from this and have added some import RSD titles from USA and Europe. In total we expect to have around 330 RSD titles in stock on the day. You can see these here broken down by music genres.
We have seen our allocations on most titles now in fact some product is arriving today and we will have good stocks on most of the Soul ,Jazz, Blues, Reggae, Hip Hop and World titles plus on many of the major Rock and Pop releases. However some of the releases are in very short supply, so these will sell out fast.
We will be open from 8am to 7pm, If previous years are a guide there will be queues in the morning to catch the more elusive titles, but it will be more comfortable after midday. 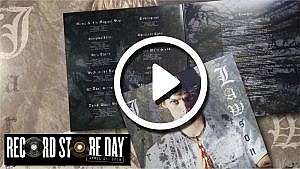 We have two very special releases on our own Soul Brother label for RSD.  Jarrod Lawson’s highly acclaimed and award winning debut album on vinyl for the first time, as a double 180gm LP with a gatefold sleeve. You can hear/see a preview of the album in this video
The other SB release is Mary Clark rare Patrick Adams produced 45 ‘Take me i’m yours/You got your hold on me.
We still have copies of the Detroit Rising album on LP and CD in stock and a few T-Shirts over from the launch party to give away with the vinyl in store and on mail order if you state your size in the notes area.

April is Jazz Appreciation month and we have taken the opportunity to feature some of the greatest classic and new jazz albums and collections that are currently available if write ups on each title. So far we have featured four albums which you can see and listen to here.
There are great vocal jazz albums by Leon Thomas and Carmen Lundy, fusion from Herbie Hancock and possibly the most influential jazz album of all time from Miles Davis. Watch out for a new album each day on our facebook site. By the end of the month you should have a great overview of jazz music and pointers to build the foundation to a great collection.

I hope that you enjoyed the show last Sunday, if you missed it you can catch it on the Podcast here.
We also publish the playlists from the radio show here so you can easily see what was played.
I hope that you can join me again this Sunday at 10am on Solar radio /sky 0129 and on DAB or the Solar app for another Soul Brother Selection. Over the next two weeks I will be featuring as many of the RSD Soul and Jazz titles as possible to give you a guide to them.
have a great weekend
Laurence
SUBSCRIBE FOR UPDATES
MUSIC GENRES
CLASSIC ALBUMS