South London’s Simon Jefferis’ album Vibrations is a rich tapesty of jazz influenced styles that typifies the restless melting pot that much of the jazz from the capital currently comprises – skittering beats, broken, chopped and reformed pieces, lazy tempos, laid back grooves and pacier numbers put him alongside the likes of Joe Armon-Jones, Project X, Tom Misch and co. Derrick Hodge’s third album ‘Color of Noize’ reflects a melting pot of influence and experience with jazz flow, hip-hop groove, soulful depth, spiritual uplift, and creative fire — but the concept is best described in more abstract terms while Maceo Parker drops his first album in 8 years in the form of Soul Food – Cooking With Maceo and comprises ten tracks of raw, old school funk with the flavours of the New Orleans school of music. The funky flavour of the city weaves its way through the album as Maceo and the band take on iconic songs of the Mississippi masters such as Dr. John, The Meters and Allen Toussaint as well as takes on Aretha Franklin, Prince and Maceo’s long-time hero and Ray Charles saxophonist, David “Fathead” Newman. Sax-man Bobby Watson’s new album is a vital continuation of the supple hard-bop sound that Watson has practiced throughout the decades, laced with the profound influences of gospel and R&B and now infused with the renewed vigor of hungry young collaborators. The legendary Leo’s Sunshipp LP that came out for the Love Record Store events has proven to be one of our fastest sellers this week – this killer album maybe comprise only 8 cuts of four tracks but every one is a winner, Ann Sexton’s rare ‘Loving You Loving Me’ album sees a reissue and it’s packed with gems like ‘You’ve Been Gone Too Long’,  ‘I Still Love You’ and ‘You’re Losing Me’.

The Tubby Hayes Fontana box set is a simply stunning collection that pulls together 15 albums in a wonderful box. These can only be sent by Registered mail overseas which will make shipping expensive but it’s a must for this value of item.

On the 7″ front Joyce Cooling’s Dori is out now, Deptford Soul Club continue their series of classic dancefloor gems with Herb Ward and Marvin Gaye and we have very few of the Penrose 45s left though there will be a limited restock coming late July so they will be up for pre-order once in. We don’t anticipated them back. Staff picks are the Jason Joshua, Thee Sinseers and The Alton, though all 5 are killers! We also have a couple of the Richard Brown ‘Sweet And Kind’ 7″ left – somewhat under the radar for some but well worth a listen.

Apologies for the delay in sending out the LRS orders – an unprecedented amount of orders along with the shop reopening and being short on staff meant that they were shipped yesterday.

The shop at 1 Keswick Road, SW15 2HL is now open from 11am – 6pm Monday – Saturday. We can only allow 2 people in the store at a time so please be prepared to wait if needs be. 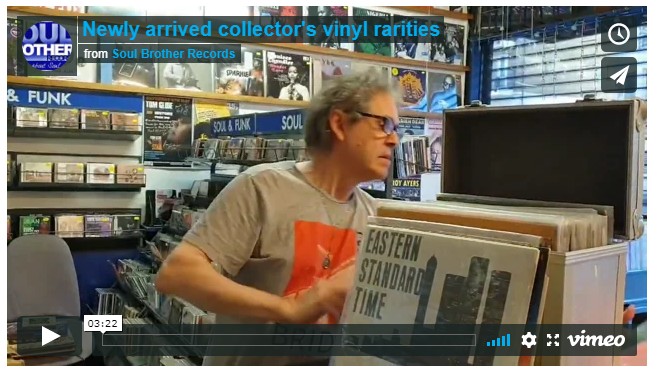 We are processing an incredible collection of albums that will be available online next week. You can buy in store or check this video to get a feel for the quality of the collection! Several titles have already sold to people seeing the vid, so check it out here

We are delighted to be bringing Earl White Jr’s 1977 modern soul rarity ‘Very Special Girl’ out on a 45. The manufacturing has been delayed so we are expecting them on the 19th June (next Friday) instead of today. Check the video here

Record Store Day has now been postponed again and will now take place on three days , 29th August, 26th September and 24th October. The lists of which titles will be each day will be published on 1st June. Hopefully by that time we will be able to invite you to the shop , but keeping social distance and on-line from 6pm on each day for what titles are still available. See the list here

We are now back in stock of the majority of Bill Withers Lps and CDs which you can see in our feature here. Also the fantastic 9cd set of his complete albums is now in stock.

An introduction to Blue Note – 10 albums you must hear

Arguably Blue Note is the greatest Jazz label ever and was responsible for releasing so many classic albums over its 80+ year history. Its halcyon era was 1950’s/ 1960’s, when it pioneered Hard Bop. At various times, its roster included the likes of Art Blakey, Hank Mobley, Lee Morgan and Horace Silver plus geniuses such as Miles Davis. The label recorded the first albums by a host of legends – for example, Jimmy Smith, Herbie Hancock and Freddie Hubbard to name just a few. The label remained active in the Jazz Funk era and Donald Byrd’s 1973 album ‘Black Byrd’ was not only ground-breaking but was Blue Note’s biggest selling LP at that time.

Selecting 10 classic albums (100 would be hard enough) is a challenge, but this introductory selection is just a taster. See the list here

****NEW BATCH OF COLLECTOR’S VINYL COMING NEXT WEEK – see above****

Recent original Vinyl Soul and Jazz LP arrivals can be seen here, there are some great collectors items still available.

Our current best selling albums and singles can be seen here.

Our usual spot on Solar will be suspended for the time being as we practise responsible social distancing by not putting ourselves or others at risk, both by travelling to the studio and also being in the studio. We think that the health of ourselves and others while also protecting the NHS is important at this time.

We are however going to continue to bring you the best weekly releases and collector’s pieces with a weekly two-hour mix that you can find on our Mixcloud. At present we don’t have the facility to record voiceovers, but hopefully you can still enjoy the music.

We timestamp the playlists and provide a download link so you can listen any time, anywhere.

Have a great weekend.